This is a recently completed private commission – a lovely piece to have been asked to do, and to have worked on.  The poem seems immediately quite simple and light, but of course speaks volumes.  As it followed on from ‘Silver’ I was in more of a calligraphy-based mindset, but I had to try and come up with something that had a timeless quality, and retained the lightness; and I thought a more modern, illustrative interpretation.  I decided the poem text should be overlaid, but this was after some wrangling over a purely text-based piece, or some kind of hybrid.  I had a fairly clear idea of what I wanted to get to, but as ever the challenge is articulating that…

The client wanted an ‘English’ landscape, something like a South Downs view – essentially the landscape is mythical but based in reality, and hopefully feels expansive.  As I progressed through the coloured pencil drawing I started adding text about halfway through as seen below, attempting to layout the poem lines in a tracing paper overlay to gain some sense of where words might ‘hit’ the landscape elements and details, which was probably the most challenging aspect as any kind of significant rubbing-out wasn’t really an option.  I needed to revisit the strength of the text a few times, firstly making sure that it didn’t get lost and secondly that the colours of the letters were essentially stronger and darker versions of those underneath.  There was a LOT of pencil sharpening going on.

As the personal context for the poem was a spring event, I incorporated March flowers and plants into the foreground. I must cite a wonderful reference by Keith Jones, Seasonal Wild Flowers, for this information.   The Caslon Old Face alphabet was sourced from one of my great Aunt’s books, co-authored by none other than the inimitable Quentin Crisp:

This is the finished piece, with details – excuse the slightly rough-around-the-edges photos! 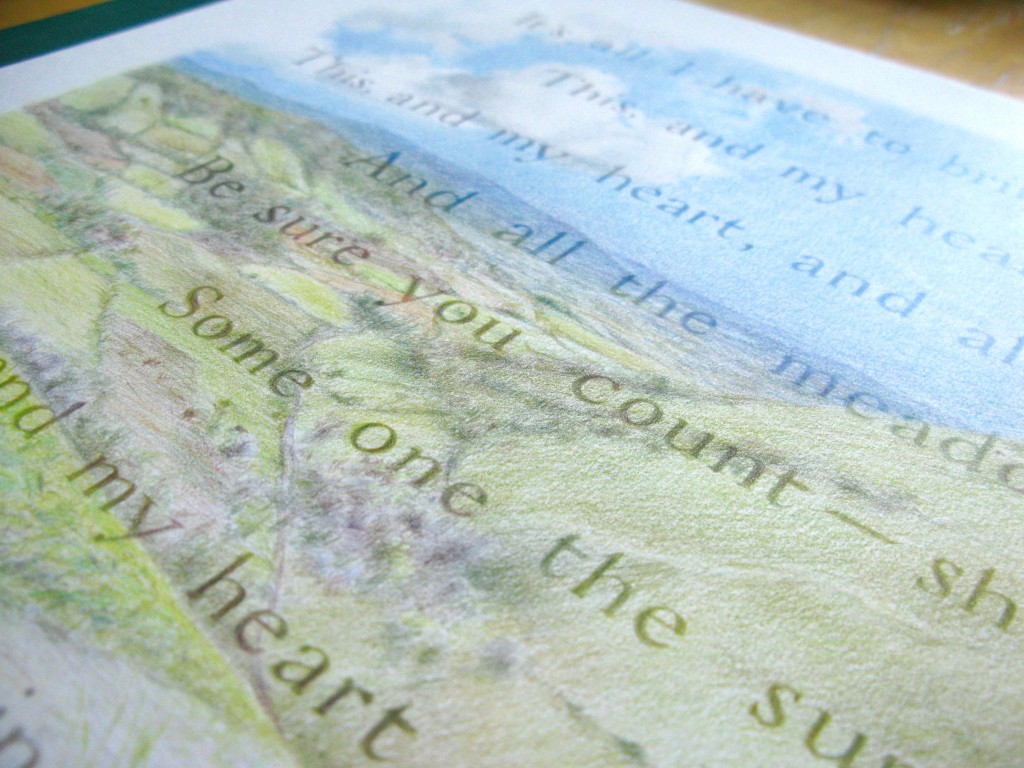